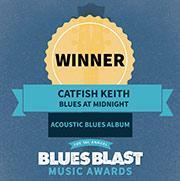 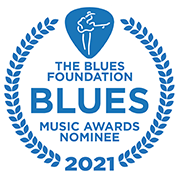 Catfish Keith was nominated for the 2021 BLUES MUSIC AWARDS for BEST ACOUSTIC BLUES ARTIST by the Blues Foundation in Memphis. 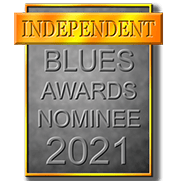 BLUES AT MIDNIGHT was nominated for the INDEPENDENT BLUES AWARDS for both BEST ACOUSTIC BLUES ALBUM and BEST TRADITIONAL BLUES SONG.

World-touring acoustic blues pioneer CATFISH KEITH has established himself as one of the most exciting country blues performers of our time. Catfish’s innovative style of foot-stomping, deep delta blues and American roots music has spellbound audiences the world over.

He has reinvented the guitar with great power and artistry, and brings a rare beauty and vitality to his music. Handing down the tradition, Catfish continues his lifelong journey as one of the brightest lights in acoustic blues and roots music.

Catfish Keith has twenty NUMBER ONE independent radio chart-topping albums to his credit, and packs houses all over the world with his dynamic stage show.

“He’s our era’s premier exponent of the classic delta blues. Those who saw him were universally overwhelmed with his veritable one-man show on the National Steel Guitar and fingerlickin’ cool country blues.”

“Hypnotic and beautiful, dark and pure.”

“There is an excitement that jumps out of the speakers. His slide work is a joy to hear. The tension of the strings with the pleading wail is eerie and touching at the same time — highly recommended.”

“The dynamics and intensity of this new release had me jumpin.’ A new atmosphere in the blues.”

“Catfish Keith is one of the best blues entertainers in the USA.”

“Dazzling acoustic guitar work. Growls and falsettos alternate in the same number, as if he’s doing duets with himself. Catfish is fearless.”

“Keith’s brand of delta blues radiates an infectious, life-affirming buoyancy. He tells stories and plays roles through his songs, and his picking displays a rhythmic and harmonic richness not always associated with the blues.”

“Catfish Keith satisfied a standing-room-only crowd of blues hungry souls. It was DYN-O-MYTE!!”

“Catfish will give you goose bumps and will leave you howling for more.”

Catfish Keith is keeping the vintage vibe, but making it new and alive – Downatthecrossroads

Pulling Blues Out of the Sky – Acoustic Guitar Magazine

Never Drop Your Steel Guitar in the Ocean – by Catfish Keith